Today a group of painters are writing about our studios.

Visit the links below to tour the participation artists' studios!


I'm lucky to have a room in our home devoted to just painting. This small room used to be my son's bedroom. Then it was an office. And now it is a studio. I'm slowly adding shelves and lighting to improve the situation. This year I broke down and put a window air conditioner in. This will allow me to paint all day in the summer, instead of just the mornings. 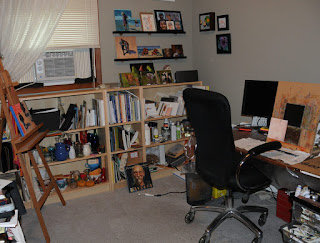 I did clean a bit before this photo. So this is my organized madness! You can see I mainly paint at my desk with a table easel. I use one of Karin Jurick's tabletop easels and love it.  I have some of my art book, panels, and still life supplies on these book shelves. 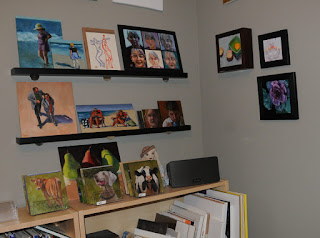 Here is a close up of my drying racks and a few paintings from some of my artist friends.

Thank you for your interest! 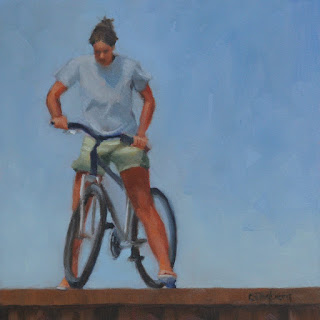 I don't know why I found that so interesting! ha!
This young lady seemed to be taking 'a moment' after riding out on a pier in Peninsula State Park. I imagine she could be looking at her reflection over the edge. 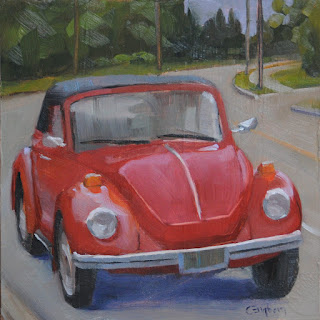 I don't normally paint this subject matter. But I couldn't resist this one. Saw this pretty VW in Door Co last year.
Posted by Cathy Engberg 8 comments: 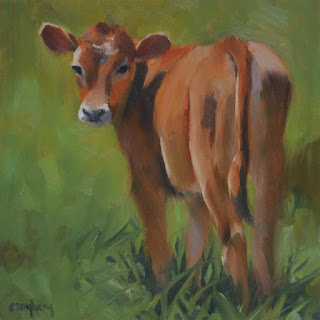 Seems like a long time since I've posted. I have been painting. I just haven't been able to take photos until this morning, so now I have a few waiting to be posted. I have only a short window of time in that sweet spot on my deck, where I can usually get a decent photo. It is in the mornings during the summer because by mid-day the sun has taken over that spot and any attempt to photograph paintings results in completely blown out photos. But we have had nothing but dark rainy mornings lately. Luckily today, the clouds thinned enough to let some decent light through and I got a few photos!

This young one was alone in a pasture at a petting zoo/farm I took my grandson to a month ago. He was the lucky one because all the other cows were locked into tiny stalls and didn't look very happy. We skipped that part and hung out with the happy calf. 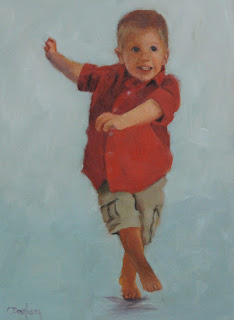 This is a commission I just delivered. This is Ely being unhappy and rebelling about having to sit through a photo shoot. Not too bad I think. If you didn't know this was him being mad you would think he was doing a happy dance! I thought this was a nice way to document this small moment in his life. 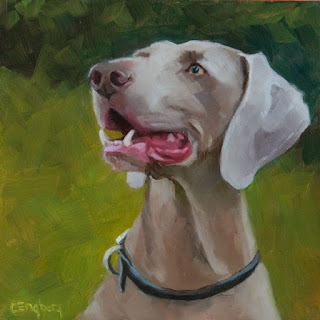 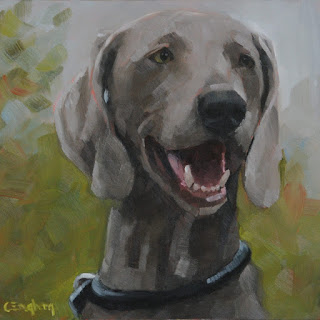 What color is a Weimaraner? I had to mix up a few piles before I just decided to get as close as I could and focus on the value relationships of all the colors. I think it turned out pretty close.

This pretty girl stopped by my booth on Sunday. Posing was hard for her even though I'm sure she wanted to. Sitting still is just not her normal. I managed to snap this one as she tried to sit still and pose! I wish I had asked about her name. I just found out her name is Mika! 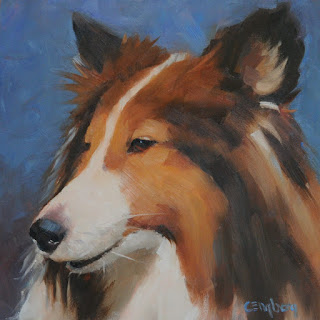 Oliver is a Shelty that wondered into my booth on Saturday at the Hinsdale Art Fair. He was sweet enough to stop and pose for me. 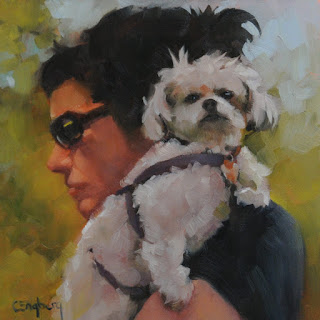 I'm back at it! Dogs, dogs, dogs! Walking, running, jumping, and riding. This is the first of a few dogs I have in the que to paint. A couple were even nice enough to stop and pose! 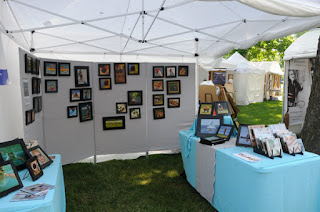 Well, I've survived my first art festival and I'm spending the morning reflecting on what I've learned. It was fun, but definitely more work than fun. I had a lot of people admiring my work,  collected a lot of emails for my mailing list, and handing out TONS of business cards and postcards I had printed up. But I found the people who liked my work the best, were most often painters themselves. And really just wanted to chat with me about my process. Don't get me wrong, connecting with other artists is high on my list of things that are important to me. But maybe discussing my marketing strategy or framing process in the middle of my booth might not be the best idea. I'll try not to get caught up in that as much. I am still hoping a few will connect with me again now that the show is over. Who knows.

I found that swiping on my little Paypal Now device is hard. And doesn't always work. I'm going to try Square next time and see if I have better luck.

I found that my Graphic Display System was pretty convenient to transport and set up, but almost impossible to keep your paintings hanging straight. And sometimes VERY difficult to get your paintings off the damn thing during a sale. Maybe I'll price some hanging systems. Not sure how expensive they are. It would also be better to have more wall space and get rid of a table.

I need to actually sew something that works as table covers instead of using the draping methods I used. I also need to have a small shelf included in my display to put bags and bubble wrap so I'm not scrambling so much for those. I need another sign or two explaining what I am actually selling since so many people walked by mumbling "look at the photos".

They put me under a tree which was great because I had shade all day, and I could keep one of my side panels open for more exposure. Unfortunately, the tree had a serious case of aphids. And everything, including me, was covered in them by the end. ugh!

I got some great photos of dogs and kids, and a few people that might be interested in dog paintings. So I'll start on that later this week. Today is just about clean up, recovery and reflecting. 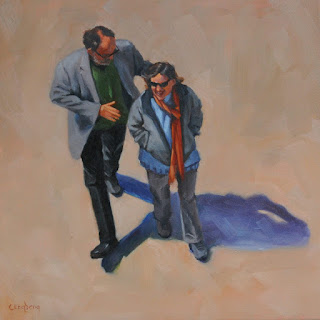 These two looked to be sharing a private joke while they sprinted down the streets of Chicago this last April. I was interested in this one because of the challenge to paint the foreshortening correctly along with the body language of these two. It was a lot of fun to do and made me stretch quite a bit.

I probably won't be posting for a while now. I'll be scrambling to finish a few last things for my show this coming weekend. And I've come down with a horrible head cold! So rest is part of my plan. I hope to get back to the studio early next week.