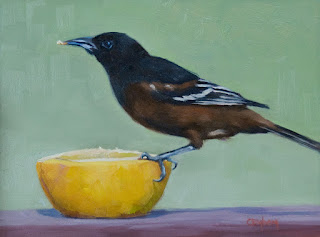 I think this is a Spotted Towhee, but I could be wrong. Does anyone know for sure?

I've had a couple people contact me about this bird, and I now think it looks most like a Orchard Oriole! I love birds!

So much going on here! I've not been painting as often because I've been moving my home studio to Studios on Sheridan at the Sunbeam building. The Sunbeam Building is a renovated 1930's era warehouse that at one time was the Sunbeam Bakery. The Sunbeam Building houses retail stores as well as Studios on Sheridan (SoS). There are over 20 artists with studios there, and now I'm one of them. I expect to be moved in and working by mid-March. I'll start being open for First Fridays on April 7th. I've been sharing some photos of my process on my Facebook page. I will post my set hours soon. I should be able to start painting there daily by next week. 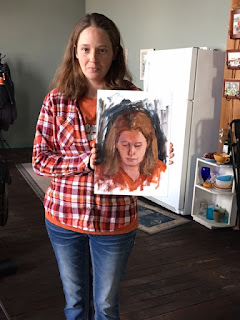 I've also been joining a friend Yvonne Ham, in her studio once a week to keep up my practice of working from life. She has groups painting from models and still life. Depending on your preference. Above is the model holding my study from last week.

Posted by Cathy Engberg No comments: